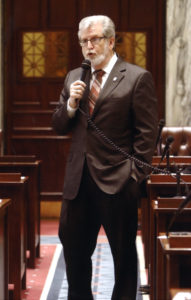 en. Roger Thompson said the end to an effort to repeal education funding was great news for Oklahoma schools and for the entire state.

The State Supreme Court ruled in June that the petition to repeal increases in cigarette, fuel and energy taxes was deeply flawed and said the ballot title was misleading. The court also said required information about legislation the petition was seeking to repeal left out required material. Under the ruling the group, which was led by former U.S. Sen. Tom Coburn, had until July 18 to circulate a new petition. The organization announced last week they would not make a second attempt.

Thompson, who is the incoming Senate Appropriations Committee chair, said the funding was critical for the future of public education in Oklahoma.

“For the past several years, our state has been hamstrung by international economic forces and by budgeting practices that needed reform. Core services, including education, have endured multiple cuts. While we have continued to seek and implement efficiencies and reforms wherever possible, we simply did not have the resources necessary to increase teacher salaries and put more money in the classroom without new revenue,” said Thompson, R-Okemah.

“If you talk about growing the economy and job creation, there is simply no better economic development tool than education. The more education an individual has, the higher their earning potential is—and that raises the per capita income of the entire state,” Thompson said. “The quality of our schools and the education levels of our work force are critical factors when businesses are deciding where to locate and expand.”

“It all starts with our public schools. But we must continue to build on the achievements of this past legislative session. Education must be this state’s top priority, but words alone won’t do it. We must make policy choices and investments that back up those words. It’s going to be my number one priority as Senate Appropriations Chair,” Thompson said.